When Henrietta Imoreh was 17, she pulled a knife on a girl at her school. She was arrested and expelled. Her life trajectory seemed destined for a downward arc.

Henrietta had been in eight foster homes since she was 14. At the time she threatened her schoolmate, she was living alone in a hostel, scared, angry and alienated.

But now she sits in Ernst & Young’s office block in London’s Canary Wharf, where she has been setting up a new role of careers consultant for young people in care. She will take on the full-time role herself in January.

“It seems so far-fetched, me working in Canary Wharf with all these smart, white, middle class people. It’s taken a lot of getting used to and I still have wobbles, but I’m basically now all ‘Let’s do it!’,” she laughs.

The turnaround in her life over the past four years has been startling: she founded and runs two businesses, has joined other company boards and is a regular public speaker.

The turning point was a chance meeting with the Agency, a social enterprise that works with deprived youngsters across the UK, encouraging them to create projects to solve the problems in their own community.

Based on a hugely successful Brazilian initiative to help young people in the favelas, the Agency has spent almost 60,000 hours supporting and working with more than 250 young people to raise money, set up projects and create jobs.

Today, parliament is hosting a celebration of the Agency’s work, giving politicians the chance to meet some of the young protagonists and discuss their enterprises and initiatives. 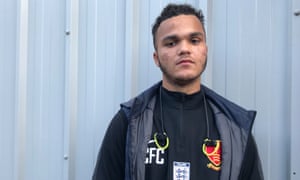 Kieran Farrell-Christian is setting up a sports club that offers young people an alternative to gangs. Photograph: Young People in Care

The Agency is of course not alone in nurturing young British entrepreneurs. But its approach is novel. It uses government data to pinpoint areas of multiple deprivation and then targets young people who understand the area best, approaching them in parks, on the street, in chip shops and at bus stops.

“We ask two questions,” said the movement’s Brazilian founder, Marcus Faustini. “Who is the most talented young person you know who should be in this project? And who are the ones who are not engaged at all, who you imagine won’t have any ideas? Because we want both of them.”

Henrietta met the Agency by chance when she was 21. After threatening her schoolmate, she had spent two years in the pupil referral unit and two more in a hostel where the atmosphere was so threatening that the kitchen was often spattered with blood from fights.

The day she met the Agency, she was sitting in the lobby of the Battersea Arts Centre in south London, crying. “Wandsworth council had been paying my rent late for four years and, at 21, the arrears they’d accumulated were suddenly my problem,” she remembered. “I was on my own, £2,000 in debt, with an eviction letter in my hand.”

But then what Henrietta describes as a miracle struck: the Agency came to talk to her. “They changed the direction and course of my life. It’s 100% because of them that I’m here now,” she said, gazing out over Canary Wharf and grinning fit to burst.

The Agency works by paying young people a small stipend to compete to participate in a three-part programme. They must identify a social need in their community, come up with a business idea to solve it and pitch their ideas to a panel of industry experts. Three successful bidders are awarded £2,000 each year to get their ideas off the ground.

Those who are not successful are encouraged to join other schemes or offered support but no funding to continue with their own idea.

Henrietta’s project was Redefine, a theatre company for care leavers. “When my project was chosen by the panel, for the first time in my life I felt proud of myself. I felt autonomy, responsibility and a sense of agency. I’ve always had external agencies – be it a teacher, a social worker, a sexual adviser, a counsellor, a mental health therapist – talking for me, but this time I could talk for myself,” she said.

One weekday evening in Walthamstow, a deprived area of north-east London, a group of local teenagers are just setting out on their own journey with the Agency. Just 15, shy, gawky Kieran Farrell-Christian makes a conscious effort to maintain eye contact and speak clearly. Using his own experience of homelessness, knife crime and gangs, he is working to set up a sports club that provides a safe space for young people to talk about knives and gang membership, then offer them a route out.

“I joined a gang because I wanted a second home,” he said. “That’s what my sports club will give these children: the chance to swap their gang for other groups that really will help them get the best out of their lives.” 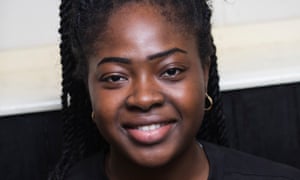 Faidat Ope is 19 and has come down for the workshop from Moston in Manchester, where the Agency has a thriving programme. “They recruited me outside the KFC,” said Ope, who has started a business to encourage young women to go into elite sport. “I had literally no intention of turning up, but when I heard what they were offering, I just thought it was too good to be true.”

The Agency believes in giving its proteges freedom to build teams, test ideas, make it happen. With that freedom comes responsibility.

“And the young people always rise to the challenge,” said Roisin Feeny of the Battersea Arts Centre, one of the key forces behind the social enterprise. “They grab that responsibility and work like they’ve never worked before because they are proud of their own idea, which has been born from their own imagination, passion, dedication, frustrations and hard work.”

The Agency UK is a Battersea Arts Centre and Manchester’s Contact programme devised in partnership with People’s Palace Projects. This year’s programme in Waltham Forest was funded by and part of the Mayor of London Borough of Culture.