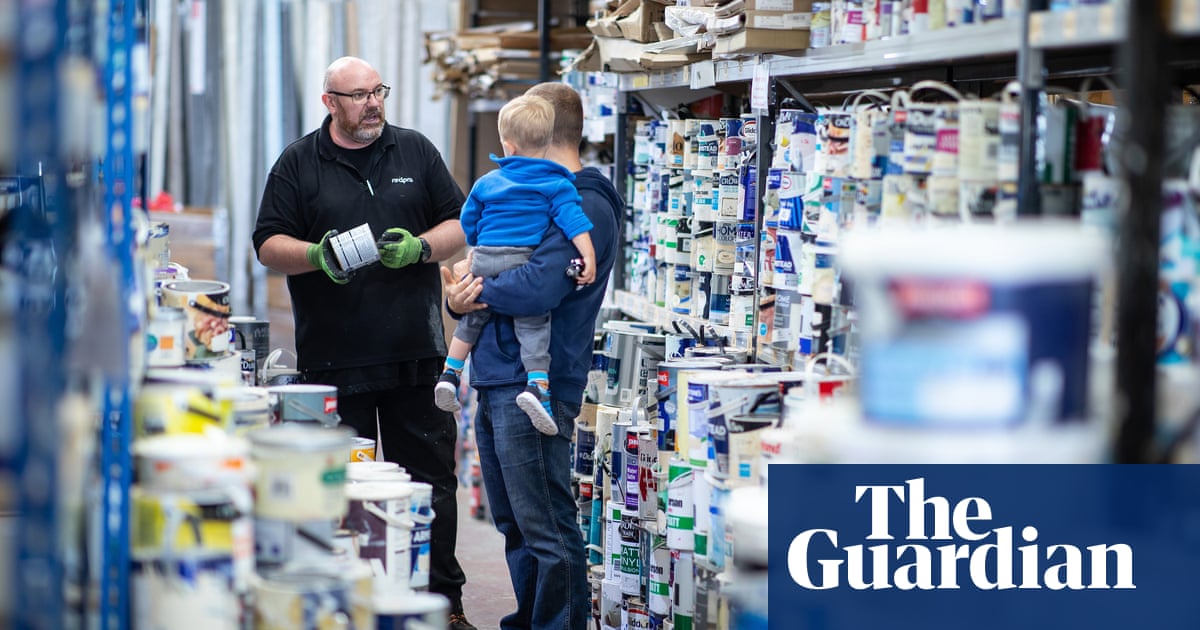 Rare is the DIY dilettante with the foresight to know they are never going to use the rest of that paint they stashed in the shed after doing up the living room. Who hasn’t kidded themselves that they really are going to touch up all those grubby spots with the leftovers in years to come?

With an estimated 50m litres of paint going to waste each year in the UK (that’s enough to fill 20 Olympic swimming pools), we are all guilty. No wonder the average home is thought to have at least 17 half-empty pots gathering cobwebs under the stairs.

Enter Community RePaint, a network of 74 projects which aims to reduce the paint going to landfill. Founded in Leeds the network wants to cut household hazardous waste and provide a cheap way for charities, community groups and low-income households to freshen up their walls and woodwork.

Like the repair cafes that fix broken appliances the movement is growing fast as people turn away from the throwaway culture and try to put less in the rubbish bin.

One of the largest RePaint schemes is run by ReciproCity, a social enterprise on the Wirral which has evolved from a building materials swap shop into a budget decorators’ paradise. Last year they received 81,100 litres of paint, donated by members of the public, manufacturers and trade wholesalers.

The paint is piled high inside their warehouse near Birkenhead, a democratic jumble of brands and finishes: 2.5 litres of Little Greene traditional oil gloss in Bone China (RRP £65) sharing a shelf with the Wilko equivalent, Pearl Grey, which costs barely a tenth of the price. In the RePaint world all paint is equal, whether recommended in Elle Decoration or sold in B&M Bargains.

All paint brands are sold here for £1.20 a litre and sample pots are ten for a pound. Before resale the paint is checked by ReciproCity’s eight members of staff to ensure there is no mould and that it is exactly what it says on the tin, says Rebecca Owens, who set up ReciproCity 10 years ago with her partner, Mike Close.

It is pot luck whether they have the colour you are after and in the right quantity. But that is where their new paint recycling project comes in. Two years ago they joined forces with a company called Newlife, whose founder, Keith Harrison, an industrial chemist, cracked the enigma code of the paint world: how to reprocess waste paint back to a superior grade emulsion.

Harrison patented the process and guards it jealously; the Guardian was not allowed to take close-up photos of the equipment or ingredients, lest his rivals figure out his secret. But what we can tell you is that it involves big plastic barrels, a massive whisk, some sort of filter and a sprinkle of additives to increase shelf life.

“Mike says it’s a mixture of art and science,” says Owens, who professes herself a “rubbish” paint reprocessor. “I tried to make a duck egg and it turned out navy. It’s not a job for monkeys. There’s a definite art to mixing the colours.”

The recycled range, called ReColour, has a selection of 20 shades with the requisite silly names: silver sonnet (a mid grey), gilbert green (mossy), powder puff (a Germolene pink). A 5-litre tub of colour costs £9 and it’s £6 for white or magnolia; a bargain compared with commercial prices – 5 litres of Farrow and Ball’s Sulking Room Pink is now a staggering £78.

Prices are even cheaper for charity shops who buy wholesale to sell on to their customers. Greys are the top-seller locally. “We can’t get enough grey,” said Owens. “Apparently we sell a lot more red than the other ReColour outlets down south too.”

Last year ReciproCity managed to redistribute 65,100 litres of the paint it had received – 28,500 of which were recycled into ReColour. Owens’ only frustration is that they end up sending all the empty plastic tubs to landfill (though the metal tins can often be recycled).

Anyone can buy ReColour, regardless of income. But some housing associations give new tenants vouchers to buy the paint when they move into a property. In Greater Manchester, the RePaint branch is operated by Rochdale Boroughwide Housing, which offers a 10% discount to its residents.

You have to put any paint snobbery to one side when buying ReColour. A look around the Wirral paint mixing plant shows what a mongrel the finished product can be: the batch of Bailey Blue that Close has just finished appears to be a mixture of Crown, Dulux and Homebase own brand, all from tubs with less than a litre left upon donation.

But feedback from decorators is good, says Owens. “We would never use a whole barrel of budget paint to make a batch of ReColour because it would be too watery,” she says, while issuing a warning to those who always believe you get what you pay for. “We have learnt a lot about the quality of what’s on the market. I can’t name names but there are some budget paints which are much better than you might think – and vice versa.”

This article is part of a series on possible solutions to some of the world’s most stubborn problems. What else should we cover? Email us at theupside@theguardian.com

The Guardian Social Enterprise Feed
« Previous Post Bristol development ‘will destroy cultural and community hub’ Next Post » Do You Know Who Has Access To Your Data? (And Should You Care?)