Andrew Cannon’s greatest ambition is to climb Everest. That, and to be happy, and perhaps live with someone some day – more modest goals perhaps, but until recently they all seemed equally impossible dreams.

Cannon found himself cast adrift when life events forced him to return to the UK after 25 years teaching abroad. He struggled to adjust and find work, or even a permanent place to live. Last year, however, his path crossed that of Simon Boyle, an award-winning chef who, while volunteering in Sri Lanka in the aftermath of the 2004 Indian Ocean tsunami, was inspired to do more for his own community. After a spell teaching cookery skills in hostels, Boyle set up Beyond Food, a social enterprise that, in its own words, uses food as a catalyst for change, hoping to break the cycle of poverty, homelessness and unemployment.

As well as running introductory courses, Beyond Food recruits an annual cohort of people at risk, or with experience, of homelessness for a two-year apprenticeship with Brigade, the charity’s restaurant near Tower Bridge, London. They graduate with an NVQ level 2 diploma in professional cookery, a prestigious work placement and an ongoing support network – their “arm around the shoulder, poke in the ribs team”, as Boyle describes it – “so they can focus on the job”. 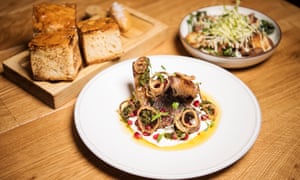 The scheme has turned out 121 graduates so far. Cannon, halfway through his first year, has a way to go yet, but thanks to the varied range of opportunities offered to trainees, in a couple of weeks he will be behind the stoves at Meatopia, his very first food festival, held annually in Tobacco Dock. He is excited, and just a little nervous, but says: “I think I will gain so much valuable experience.”

One of the things he is looking forward to most is the chance to taste food from the chefs headlining the event. Having helped Jackson Bristow of Cornwall’s Nancarrow Farm at a preview tasting earlier this summer, he says he was “blown away” by the stuffed courgette flowers in particular. “I had never seen those before … life has changed for me so much.”

He is likely to have a few more surprises in store: this year’s festival is bringing together an eclectic line-up, which includes Amninder Sandhu of Mumbai’s Arth, described by Marco Pierre White as “the girl with gold in her fingers”; the American Bryan Furman, Georgia’s king of barbecue, and burgers from Singapore pop-up Rosita’s Deluxe, as well as cooks from all over Europe. It’s a thrilling menu and Mat Kemp, the creative director of the festival, now in its sixth year in the UK, sees Beyond Food as the perfect partner.

“We fly in chefs from around the world, and they will maybe come with just one sous chef, so we need to give them a team. Not only is the restaurant industry short of people training in kitchens, [Britain is] leaving Europe, where most of them come from,” he says. “But what Simon does is just a bloody great thing, taking people in challenging situations and giving them something to do.” Up and coming chefs are always keen to help out but Kemp believes the Beyond Food apprentices “will be hungrier than the others, maybe”.

It’s a pressure fellow trainee Nigel Adams feels acutely, excited as he is to soak up knowledge and experience: “I don’t want to let anyone down, on one hand, and on the other everything’s like a dream. I’ve gone from washing dishes to working on the grill, and the pass [running the order system and overseeing the dishes going out to waiting staff]. My life’s evolved so much in such a short time.” Adams describes himself as “a good person who made a huge mistake and paid the consequences”. He spent time in prison and came out with substance abuse issues, but says: “Beyond Food gave me a second chance in life.” 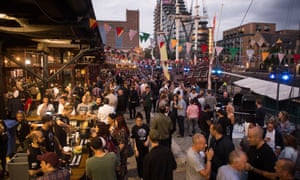 The trainees are also unusually well qualified for the challenge; Brigade is run as a serious operation – “we haven’t opened up a back street caff: they’re working in an amazing restaurant,” Boyle points out. In a refurbishment last year, he decided to replace a more conventional setup with charcoal grills and wood-burning ovens; “we’ve just got the one gas stove now”. Cooking over fire is “a great skill to teach apprentices” and sets the restaurant apart from others in the vicinity. “We needed to offer something different. Quite often people think we’re just wishy-washy do-gooders, but we’re a strong business and we need to be because we take our profits and reinvest them. We can’t afford to hide behind our social enterprise status.”

His team will be relying on a wood-smoked, marinated goat dish at Meatopia to augment those profits, part of a menu rather more eclectic than one might expect from a meat feast, albeit an avowedly sustainable one. “Back in 2013, you could stick some pulled pork in a bun and that was a dish – now it’s a bit more complicated, more chefs have got involved with fire, and they’re creatives, they’re artists,” Kemp muses. “If we filled the place with burgers and prime rib, we’d probably make more money, but I’d like to think we’ve made people more adventurous.” To this end, alongside the brisket and grilled oysters, there will be someone doing slow-cooked tendon, “really soft and glutinous”; tacos stuffed with ox tongue, haggis and bone marrow and even the sausages, from Hong Kong’s Sausage Commitment, will be fermented (albeit in Spain in this instance, due to import restrictions).

Kemp says the atmosphere they are aiming for at Meatopia is that of going round for a barbecue with some mates who are really good cooks, where there is a bit of music and someone who brings great beer – “just a load of happy people, basically”. Boyle, meanwhile, describes the trainees as some of the most positive, optimistic people you’ll ever meet. “It’s a gift, in many ways, working with homeless people. They’ve lost so much in their life, they are just thrilled to be here.” The two do indeed sound like they will go together like, well, meat and fire. Which is handy, because …

The Guardian Social Enterprise Feed
« Previous Post Collaborating for Cleaner Waters: B Corp Initiative Funds Research to Reduce Plastics in the Ocean Next Post » Adapt and Innovate: How Business and Finance Can Lead Positive Change