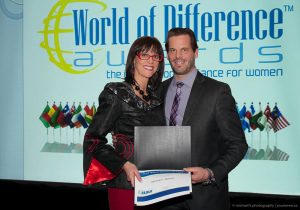 The Global Forum’s agenda focused on leadership, innovation, sustainability, as well as cultural and generational issues.  It also featured TIAW’s World of Difference Award winners attending from 19 countries on five continents. This year’s World of Difference awards recognized 100 difference-makers from over 30 countries for their efforts in advancing the economic empowerment of women locally, regionally or worldwide. Recipients were selected from leaders of communities, organizations, corporations, regions, and countries who have taken action to support women’s economic empowerment and advancement in society and in business.

“Meeting women all over the world making change allowed for thought-provoking discussions which gave me a renewed belief that collectively we can lift communities out of poverty by giving women opportunities to lead,” said Suzanne F. Stevens. “By networking with women from all over the world, I know the value of these connections and am excited to move ahead and involve other women and men in my network in these initiatives.”

For more information on Suzanne F. Stevens visit youmewe.ca/suzanne-f-stevens-bio/ or contact suzannefstevens@youmewe.ca or 416-570-6657.

TIAW advances the economic power of women through its network of members and World of Difference award-winners from around the globe including Africa, the Americas, Austral Asia, Europe, the Middle East, and Oceania.

From supporting micro-credit in the developing world to advocating for more women in top global boardrooms, TIAW’s work is based on the knowledge that when women and girls are economically empowered, whole families, communities and societies benefit in equal measure.

For further information about TIAW, please contact Stephanie MacKendrick by sending an email to MediaInquiries@tiaw.org

Being better or different from competitors isn’t enough anymore

Being better or different from competitors isn’t enough anymore

Interview with CEO of Speakers Alliance

Interview with CEO of Speakers Alliance