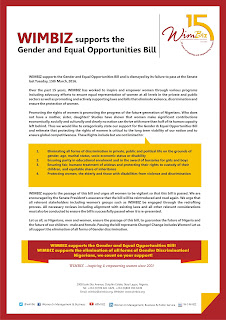 WIMBIZ supports the Gender and Equal Opportunities Bill and is dismayed by its failure to pass at the Senate last Tuesday, 15th March, 2016.

Over the past 15 years, WIMBIZ has worked to inspire and empower women through various programs including advocacy efforts to ensure equal representation of women at all levels in the private and public sectors as well as promoting and actively supporting laws and bills that eliminate violence, discrimination and ensure the protection of women.

Promoting the rights of women is promoting the progress of the future generation of Nigerians. Who does not have a mother, sister, daughter? Studies have shown that women make significant contributions economically, socially and culturally and clearly no nation can thrive with more than half of its human capacity left behind. Thus we would like to categorically state our support for the Gender & Equal Opportunities Bill and reiterate that protecting the rights of women is critical to the long term viability of our nation and to ensure global competitiveness. These Rights include but are not limited to:
WIMBIZ supports the passage of this bill and urges all women to be vigilant so that this bill is passed. We are encouraged by the Senate President’s assurance that the bill will be reintroduced and read again. We urge that all relevant stakeholders including women’s groups such as WIMBIZ be engaged through the redrafting process. All necessary reviews including alignment with existing laws and all other relevant considerations must also be conducted to ensure the bill is successfully passed when it is re-presented.

Let us all, as Nigerians, men and women, ensure the passage of this bill, to guarantee the future of Nigeria and the future of our children – male and female. Passing the bill represents Change! Change includes Women! Let us all support the elimination of all forms of Gender discrimination.

WIMBIZ supports the elimination of all forms of Gender Discrimination!

Nigerians, we count on your support!

Originally posted on Welcome To The WIMBIZ Blog by Women In Management, Business & Public Service (WIMBIZ).